The combination of increasing vessel size and higher speed requirements are driving hull form design into new areas  (think of the new launch by SilverYachts’ recent launch of M/Y BOLD, the 85m fast explorer capable of 24 knots).  In this expanded trade space where decisions are made regarding hull form, there are lots of options.  Potential hull forms include round bilge, hard chine, and double chine hull forms.  Because these hull form types are classified or characterized differently in their traditional naval architectural  coefficients, the need exists to create a universal metric for the comparison of the different shapes and their relative performance. DLBA undertook a study to identify and summarize the different systematic hull form series available in the public domain.  The results of this study are captured in this technical paper by Blount & McGrath. Perhaps the most significant conclusion is that, for minimum resistance, irrespective of the hull form, the slenderness ratio of the hull (L/∇1/3)  should be kept above 6.5 for minimum resistance when operating at speeds in the semi-displacement regime.

In case you would like to receive the full paper, or discuss about this subject, please contact Jeffrey Bowles. 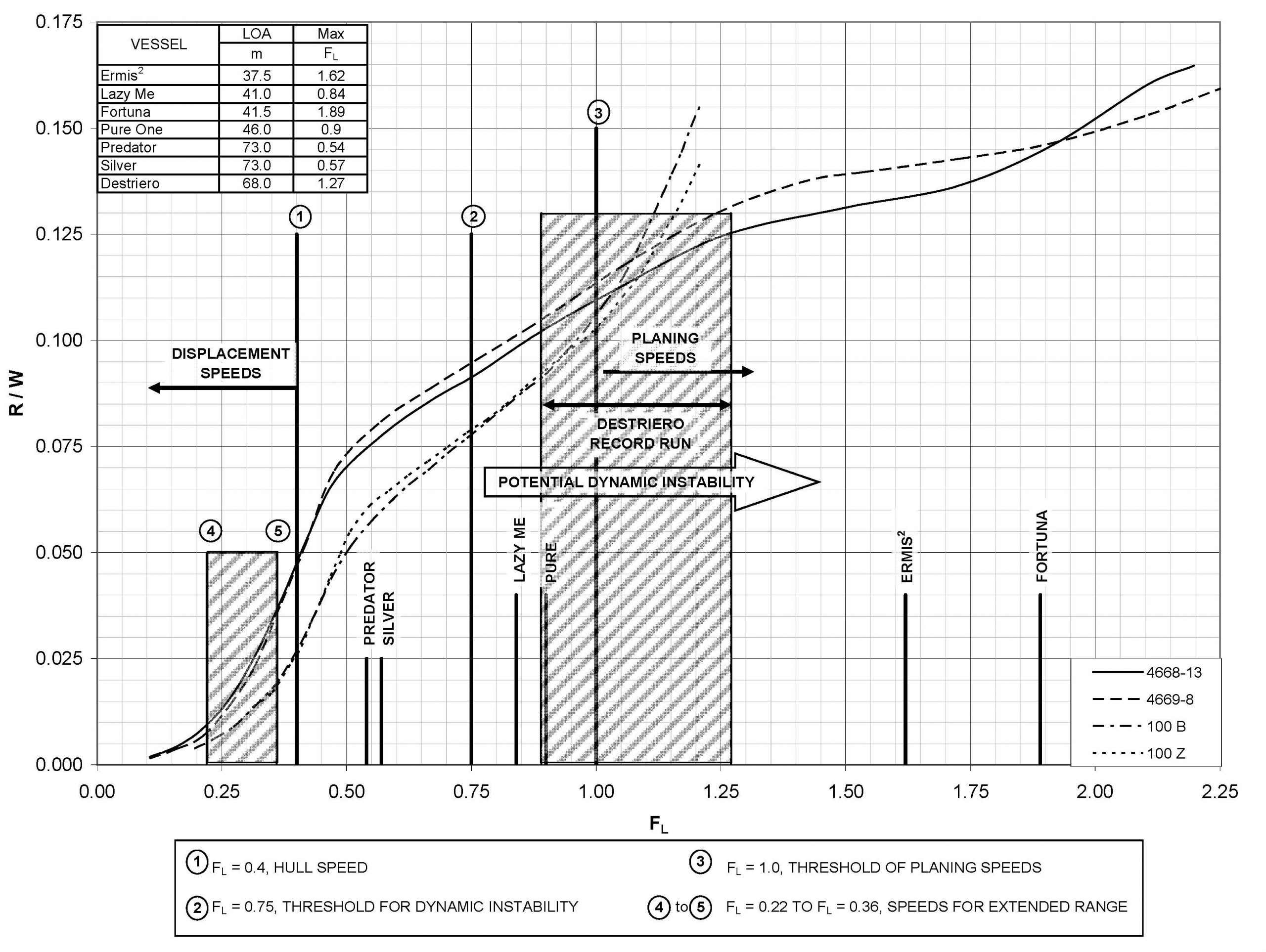 Mega yachts are growing in scale. The combination of cruise and maximum speeds, along with increase in hull lengths result in operational Froude numbers, FL, between 0.3 and 1.0. The concentration of current mega yacht projects have FL between 0.3 and 0.6 with few approaching FL = 1.0. Hull forms with different transverse sections show a variation in resistance characteristics for similar slenderness ratios in this range of Froude numbers. Resistance values among other geometric considerations are sensitive to slenderness ratio and longitudinal center of gravity, LCG. On occasion, LCG shifts, stern wedges and bulbous bows are techniques being employed to achieve minimum resistance for traditional displacement hull forms. However, these techniques need to be approached with caution as transverse instabilities can result at speeds greater than 22 to 25 knots. Hull form variants incorporating flow-separating spray rails become significant at high speeds. 500 mt was selected as being representative of a typical displacement for mega yachts. Model test data were scaled to make comparisons and analyses of bare hull resistance of many available experimental hull series. Thus, this paper addresses resistance variations related to different hull forms, slenderness ratio and other hull characteristics along with suggested design criteria for forecasting the threshold of dynamic transverse stability.

18. SCHOLARS, R.E., ‘An Investigation of the Performance Characteristics of a Long, Slender Hull’, Trident Scholar Report, U.S. Naval Academy, May 1968.